Founded in 1924, Old Spanish Days Fiesta is a celebration of Santa Barbara's Hispanic heritage. Utilizing Spanish flair to lure summertime tourists to the Santa Barbara area and distinguish the city amongst other surrounding cities, Fiesta incorporates a revival of the 1830s and 1840s Spanish style of dancing, music, and spectacle. These traditions draw from Mexican-period fiestas on nearby ranchos, along with many previous Santa Barbara-based festivals, including the Mission Centennial (1886), the Floral Parade (1891), and La Primavera (1920). This online photograph exhibit highlights some of the major traditions that have carried through from the first Fiestas of the mid-1920s to today, including the Children’s Parade, the Mercado, and the various locations around Santa Barbara that continue to be mainstays of Old Spanish Days.

This collection of photographs, donated to the Presidio Research Center by SBTHP's founder Pearl Chase, is composed of images by several photographers, including De Marino, Padilla, J.W. Collinge and most notably Karl Obert.

SBTHP invites you to reflect on Old Spanish Day’s roots and explore a selection of Miss Chase's collection.

For more information on rights and permissions for this collection, please visit the Presidio Research Center webpage (http://www.sbthp.org/services.html). 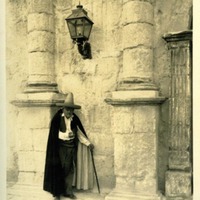 A Fiesta participant in costume at Old Mission Santa Barbara. 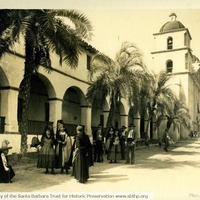 A tradition kept to this day, icons of the city were used as hubs of social activities for Fiesta. Here, participants gather at the Santa Barbara Mission in preparation for Fiesta activities.

Woman in Fiesta costume standing in front of archway 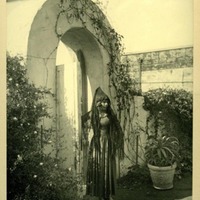 Woman in Fiesta costume standing in front of archway 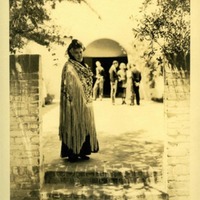 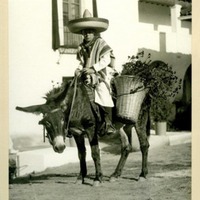 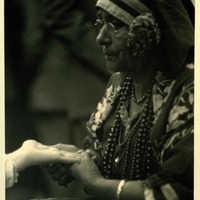 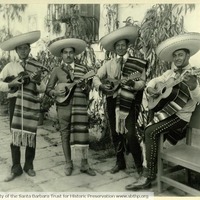 A June 17, 1919 edition of the Daily News proclaimed that "Spanish colors, hospitality, and traditions will predominate at Santa Barbara's summer fiesta.” Here, one of many traveling mariachi bands fill the downtown area with joyous music and… 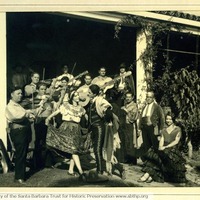 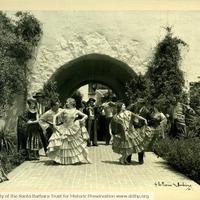 Music and dancing in El Paseo 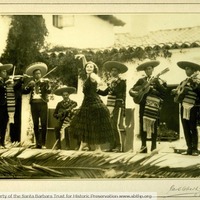 El Paseo, built in the early 1920's around Casa de la Guerra, was the heart of Old Spanish Days Fiesta with a mercado, performances, and public gatherings. Here, one lovely lady performs a romantic Spanish dance surrounded by a six-piece… 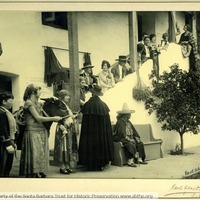 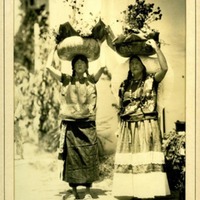 With large gourds resting on their heads, these women travel around the mercado with flowers, vegetables, and fruit.
View all 21 items