Born in 1923 at St. Francis Hospital to Italian parents, Bruno Mautino is a Santa Barbara native and served in the Air Force during World War II. Owner of the S.B. Tire and Retreading Company, Bruno also played in the American Legion Band and played the saxophone and clarinet in several other musical groups. His wife, Phyllis Moore Mautino was the first licensed female pharmacist in Santa Barbara and spent most of her career at Gutierrez Drug Store. Growing up he had a diverse set of friends, including Chinese and Japanese Americans, and attended Santa Barbara High School. To this day, he remains close friends with another participant in the Presidio Research Center Oral History Project, Jackson Cianfrone (see his interview here).

Clip 3: Bruno recounts a time him and Jackson “lost their shirts” in the back room of Jimmy’s Oriental Gardens.

Clip 5: With pride, Bruno speaks about his wife, Phyllis Moore Mautino, and her accomplishments as the first licensed female pharmacist in Santa Barbara

*To hear the entire oral history interview or additional clips, please make an appointment with the Presidio Research Center at (805) 966-5073. 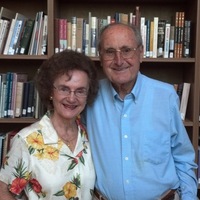